Khairani Barokka is Modern Poetry in Translation‘s inaugural poet in residence in 2019. ‘Against Terra Nullius Translation’ is Barokka’s first article in her residency.

If you’ve ever seen a popular meme floating around social media, stating the need to fill the entire continental United States with trees, it is one that fills numerous indigenous populations with ire. ‘Rewilding’ here is the simple notion that trees are all that’s needed to fill what has always been a vacuum; that indigenous populations have not been present, let alone the survivors of genocide and continual land rights battles; that indigenous knowledge practices regarding complex natural ecology are unsophisticated. This is the notion of ‘terra nullius’, that ‘nature’ is pristine, and separate from indigenous humans whose existence continues not to matter, and that ‘planting trees’ without any further elaboration is the resolution to environmental ills. As an Indonesian for whom trees in palm oil plantations symbolise the decimation of hectares of old growth rainforest and displacement of millions, all to appease global consumers and our ease of acquiring toiletries and foods, ‘planting trees’ when they are part of such plantations is the equivalent not to ecological rebalancing, but to the wholesale destruction of communities, and of the flora and fauna they have developed balanced relationships with over millennia. If you’re wondering how all of this is linked to translation and poetry, it is deeply related – how we as Indonesians write about a country in socioecological crisis and have our art consumed by others in this moment affects actual policy, and actual human interactions with us and the lands we come from.

It is about the subtle and not-so-subtle persistence of Orientalist ideas of Indonesia as something to be discovered; of translation before the advent of foreign translators and markets as terra nullius – that Indonesians have not always been translating, writing poetry, creating and resisting. ‘Indonesian poetry’ is equivalent to ‘trees’; never inherently good or bad but subjective, contextual. To quote a term writer and scholar Intan Paramaditha applies to film, the ‘narratives of discovery’ surrounding Indonesian poetry, what poetry is chosen, and the way Indonesians’ poetry is presented, matters a great deal. It is how we frame ecologies of art, and of care.

As a country with hundreds of different languages, there is no one ‘Indonesian canon’ nor ‘Indonesian literary scene’. This is a nation with the fourth biggest population in the world, with writers from Sabang to Merauke, with languages as specific as Kata Kolok, a sign language developed in one village in Bali, to Bahasa Indonesia, the official language taught in schools nationwide. Those who claim that they understand what ‘Indonesian literature’ definitively is, but only look at writers who work in Bahasa Indonesia, and in writing, are denying not only hundreds of other linguistic traditions within nation-state borders, but also deny modes of communication in rich oral traditions that are under threat of extinction, including D/deaf and disabled languages.

Indonesian artists and writers have created over millennia so many different, fertile, sophisticated cosmologies of story: written, oral, tactile. To take Javanese cultures alone, these range from the epic, ancient poem Serat Centhini to all-night wayang performances that have gathered communities together, to children’s songs such as ‘Cublak-Cublak Suweng’ that have deep philosophical meanings (I did my best at a cover as part of the Annah: Nomenclature performance at the ICA). In fact, the Javanese alphabet itself is a poem (think of it as though abcdefg hijklmno pq… etc. spelled out actual verse). Oral languages and oral forms of language are under dire threat of extinction in Indonesia, as elsewhere, as a continuation of colonial policy – mostly by the Dutch, though residing in the UK, it often comes to mind that parts of what is now Indonesia were also colonised by the British, among others – where the written word created the law. However, to understand Indonesia is also to note how dominant Javanese cultures have colonised other cultures in Indonesia, including through violent means. It is also to understand that all the hundreds of local cultures have always translated between each other in ways that lead to new cultural forms, existing in different ways within sociocultural movements, that may never reach Western readership, and do not exist for Western readership.

So when one is thinking of translated poetry in Indonesia, what is the cultural ecology and financial ecosystem that has allowed that poetry to reach you, why that poetry, and how does it benefit author, translator, and also the communities of care that each comes from? Considering cultures of sexual harassment and assault are rampant in Indonesian literary communities as they are around the world, what are the consequences for poets and translators who refuse to work with cultural centres who support sexual assaulters; centres that may have cultural clout and the ability to penalise non-compliant artists? What happens to those who continue to work with them? What tropes about Indonesian-ness are being perpetuated, and why? How is dissent between Indonesian writers managed by cultural councils, and what is at stake in doing so? Which writers get put on what panels, based on what assumptions?

What happens when those of us given the platform to communicate to non-Indonesians are: overwhelmingly abled or (in my case) abled-passing, able to communicate in English for foreign media consumption, and writing in literary forms that Western markets understand – the poetry collection, the essay collection, the novel, the biography, the book itself? What is being ignored and erased, and what is the actual purpose of connecting Indonesian poetry with other poetry cultures around the world, considering Indonesian poets have varied agendas and moral viewpoints? No one will ever know all of Indonesian poetry; knowing this, how do we perceive how Indonesian poetry is market-focused and presented? The question of who runs literary festivals and who is involved in funding is always political. International literary industries’ actions always benefit certain communities of care over others. Remember, connections between forms of poetry originating in what is now Indonesia and those from other regions are not new; they’ve been happening over literal millennia. The first recorded person in Western Eurasia to write of Java was Ptolemy (the Twitter user @siwaratrikalpa is a great repository for charting these histories). A poetry colleague in the UK once expressed great surprise when I told them that the pantoum is pantun, a form still prevalent in and indigenous to Indonesia. They’d been taught it in school, they said, and had always thought it was French.

Translation requires more than just broad political understandings that are transplanted from the contexts of majority English-speaking countries and supposedly applicable to all. It requires an understanding of the existence of truly hundreds of different feminisms in a country like Indonesia, and that unequal power dynamics operate in and among each. It requires a chess player’s understanding of what you understand and what may be oblivious to you regarding the politics of literature within the area(s) and language(s) you are translating from, and between them. Even the most intimate stories are political, particularly for a country like Indonesia where what kind of art you make has literally meant life or death. Under three decades of rule by authoritarian dictator Soeharto, we have negotiated the relentless need to create with the need for self-preservation, and continue to do so – in R. Diyah Larasati’s The Dance That Makes You Vanish, she details how women in the Soeharto era negotiated certain art forms being marked as dissent, and others marked as compliant with the state. Is your poetry deemed compliant? Why or why not? As I am writing this in the UK, what is your compliant or non-compliant poetry’s relationship to the UK’s store of Indonesian literary artifacts taken in colonial times?

Translating Indonesian poetry requires understanding that we survived decades of systematised trauma through dictator Soeharto’s state media, starting from a very young age, so to critique notions of violence and justice in Indonesian poetry requires a long view. It is to understand that the battle for truth and cultural memory-keeping surrounding the Western-backed genocide of 1965-66 among writers, among readers, rages on, with multiple interpretations of these events. Violence that operates on many registers, that influences vocabularic nuance. It is to understand that when my peers and I say we were traumatised by the state, it is not to say we couldn’t be in deeply love-filled and heartily laughing childhoods as well. It is to understand that communities can resist and thrive even within deeply debilitating circumstances caused by neoliberalism and corruption bred by, initiated by, said genocide and the duress of violence prior to and after. It is to not make assumptions about what happens in a ‘shanty town’ or a ‘slum’ – it is to not exotify, denigrate or tokenise people in service of a sympathy note. It is not to lump Indonesian women from hundreds of different cultures, languages, and different relationships to the nation-state as one. A Papuan woman writer and an Acehnese woman writer are both from provinces that have historically been violently oppressed, but in different ways. In what ways does associating Indonesian writing with nation-building mean that writing dissent against the nation-state of Indonesia, if the poetry comes from, for instance, Papua or Aceh, is seen as an inherent negative? Is it less ‘marketable’?

What does it mean to say multivariable ‘Indonesian poetry’ is inherently good, in 2019 in the United Kingdom? What does it mean to state that we want to support this writer, this translator, these communities of care? Indonesian poetry and translation thereof does not exist in a vacuum of genial artistic creation. If you are a translator, especially – there are incredibly complex cultural contexts that you are part of, and may not be aware of. All of us, myself certainly included, must be reminded of how much we do not know, and how important it is for Indonesian writers to define ourselves as artists, without erasure of millions of others.

My goal as part of this residency is to translate artists whose communities I believe in, as much as the individual artist’s work; to recognise communal ways of being as important, against the myth of the lone artist, the lone achiever of ‘success’. I want to learn and continually try to be as ethical as possible in an industry where abuses of power continue to happen. To translate and write poetry should demand honesty about our limited scope of knowledge. I was recently reminded that to try to better the world according to our ethics, despite all the toxicity in the world, is all anyone can do. Against ‘terra nullius’ translation, and blanket statements that stifle truth, I invite us to move towards ethical care for Indonesian poets and poetics, with all the above complexities in mind; to marvel at different poetics’ persistence, and to interrogate ourselves, our responsibilities, and to what we are lending our art.

Now read the parallel piece Why Are Indonesians Being Erased From Indonesian Literature? by Tiffany Tsao, published by Electric Lit 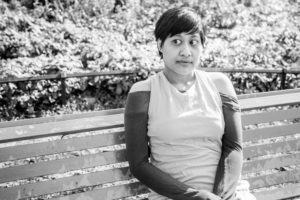 Khairani Barokka is Modern Poetry in Translation‘s inaugural Poet in Residence, supported by the British Council.

Okka is a writer, poet and artist in London. She was an NYU Tisch Departmental Fellow for her masters, Emerging Writers Festival’s (AUS) Inaugural International Writer-In-Residence (2013), and Indonesia’s first Writer-In-Residence at Vermont Studio Center (2011). Published internationally in anthologies and journals, Okka has presented work extensively, in fifteen countries, is a frequent public speaker, and has been awarded seven residencies, and various grants and award nominations. She is author and illustrator of poetry-art book Indigenous Species (Tilted Axis Press, 2016) translated by Red (Yen Hai) into Vietnamese as Loài bản địa (Ajar Press, 2018), and co-editor, with Sandra Alland and Daniel Sluman, of Stairs and Whispers: D/deaf and Disabled Poets Write Back (Nine Arches Press, 2017). Her first full-length poetry collection, Rope, was published by Nine Arches Press in October 2017. Visit her personal website.