Your soul and my own are lovers
Interwoven in the Tibetan runner.

Light in light, enamoured dyes,
Stars that wooed each other the length of the skies.

Our feet rest on the precious object,
Mill-ions-and-mill-ions-of-sti-tches-in-breadth.

Sweet lama-son in your abelmosk-shrine,
How long now has your mouth been kissing mine
And my cheek yours through brightly knotted times?

January 2015 marked the 70th anniversary of the death of Else Lasker-Schüler, a German-Jewish writer who was forced to flee from Germany in 1933, and died in poverty in exile in Jerusalem in 1945. Born in 1869, Lasker-Schüler, a leading figure in the Expressionist movement, was held by Karl Kraus to be ‘the greatest poet of modern Germany’ while Go fried Benn described her in 1949 as ‘the greatest lyric poet of the century’.
As a poet, playwright, and painter, Lasker-Schüler lived a highly imaginative life, as manifested in the creation of her alter ego ‘Prince Jussuf’, her renaming of fellow artists, and in her exotic appearance. Indeed, Benn, whom she dubbed ‘Giselheer the Barbarian’, and with whom she had a brief affair in 1912, recalled in his memoirs just what a striking figure she cut on the streets of Berlin:

She was small, as slim as a boy in those days, with coal black hair cut short, which was still most unusual, and big raven-black dancing eyes with an elusive, unfathomable gaze. You couldn’t cross the street with her, neither back then nor later, without the whole world coming to a halt to look at her: her extravagant gown or trousers, her amazing overcoat, neck and arms covered in gorgeous costume jewellery…

By 1912, however, Lasker-Schüler, was more than a familiar, flamboyant sight. She had in fact already begun to establish a literary reputation which culminated in the Kleist Prize for Literature in 1932. And while she wrote three plays, many short stories, and numerous essays, she is best known for her poetry.
The following poems have been selected from across her body of work and are representative of her sensual poetry rich in fantasy, symbolism, and intense emotion. Her poems, moreover, abound in word play and neologisms. These o en took the form of compounds, which the structure of German facilitates, to convey a particular emotion or level of emotional intensity more accurately. A large part of her work comprises love poetry, but there are also deeply religious poems and prayers, poems about family and friends, and poems reflecting her experience as a bohemian female artist in Berlin, or, la erly, her exile from that city.

From Russia to Lithuania, a Strawberry

Published in The Tangled Route, 2015 Number 3 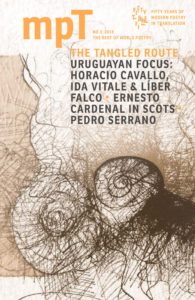 Also by Else Lasker-Schüler