The formatting of this poem may be affected by presentation online. Click here for a correctly formatted version.

Tamil words that lilt
soothing as a lullaby on a mother’s breath.
Their isaioli, their music
nourishing our uyir,…………………..(life)
marked on a stave
imagined a few millennia ago.
In whispers of promises they show themselves
as pandal…………………..(songs)
and kathai…………………..(stories)
and kavithai:…………………..(poetry)
the Goddess’s gifts from her river throne.
Our generations were formed by their fluid naatiyam…………………..(dance)
our voices modulated by their scripted sangheetham.…………………..(hymns)
And when we dreamed,
our dreams erupted
in அs and இs and உs:
building blocks of a nation
now without a homeland,
a people now without a place.

And when in ’56
with the Sinhala Only Act
they tried to silence your innisai –
the sweetness of your melody –
gag your uyiroli …………………..(vowels)
and eradicate your meiyelluthal, …………………..(consonants)
we took to the streets –
carrying your truth as our arms.
Warriors of the Tolkkaapiyam
on Galle Face Green,
paying with our blood for your right to be.
Oru naadillaathe aatkal
a people without a country,
in exile,
bearing the music of your beauty, still.

In June 1956, the Sinhalese nationalist government of Sri Lanka, led by S. W. R. D. Bandaranaike, passed an Act of Parliament stating that the Tamil language would no longer be recognised as one of the national languages of the country. In doing so, the government sought both to impose a Sinhalese doctrinal hegemony over the Tamil people, and to disenfranchise a section of the population uneducated in the Sinhala language. Birth and death certificates, hospital records, job applications could no longer be filled in by the Tamil population, and this led to protests on Galle Face Green in the heart of Colombo. The law was repealed a few years later.

I have used both English and Tamil when writing about this case of glottophagy (or ‘linguicide’). It seems inconceivable when writing about the threatened loss of my mother tongue, not to draw on the beauty of its cadences (in Tamil as well as in translation) within my poem. There are a couple of things to note. In the lines ‘And when we dreamed | our dreams erupted | in அs and இs and உs’, the அ, இ, உ (Aaa, Eee, Ooo) are the first three letters of the Tamil alphabet. Later I refer to the Tolkkaapiyam. This is the earliest written Tamil grammar, believed to have originated, in written form from oral sources, sometime between fifth and tenth centuries BC. This text is a fundamental cornerstone of Tamil Literature.

I left Sri Lanka in the late 1980s after the brutal intervention of the Indian Peace Keeping Force. Under them, I learnt to fear the Tamil language itself. My family, and those around me, stopped speaking Tamil on the streets, switching to English, as a way of protecting ourselves from the accusation of being Tamil Tigers. My mother, when negotiating with the Indian soldiers for food or safe passage, or when pleading with them as they lined us up to be shot, spoke to them in Hindi. This was the language of the conqueror, the language of solidarity with the oppressor, the language of submission. Tamil on the other hand was the feared marker of aggression, of difference, signifying a strength which the Indian soldiers feared, and which they caused us to fear in turn. When I arrived in the UK as a deeply traumatised refugee, I refused to speak in Tamil. And even now, 30 years later, I cannot speak it. I stutter, stammer and the words get stuck in my throat. Ironically, in my case, the wishes of the post-independence Sri Lankan government have been realised. I can think in Tamil, and write in it, but my mouth cannot utter the Tamil words that my heart and mind formulate. I commit linguicide every day that I choose not to speak Tamil to my children. I believe in a polyglot future, but I yearn to sing the lullabies of my Tamil past.

Greetings to the People of Europe!

Published in The Great Flight, 2016 Number 1 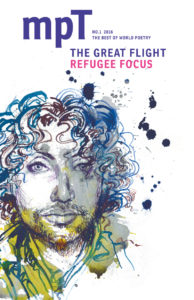