They closed their non-aiming eye
and watched the target
and chose an aiming point
and brought the edge of the blade
to the notch of the rear sight
with all the gunsights upright
and leaving a white thread
they shot.
But missed.
Managed to kill Muhamad El-Hayk, 24,
and severely wound his father Abdalla, 64,
all ‘as needed and according to procedures’,
but missed Maisun El-Hayk,
only slightly wounded her
in spite of her big belly
that happened to be a perfect aiming point
(but hadn’t they made her undress at the roadblock before
to ensure the belly was a belly indeed
and the labour pains – labour pains
before it occurred to them
to proceed with
‘suspect arrest procedure’?)
and also failed to hit
her foetus daughter
and send her to heaven
before she came to this world
– must have overlooked that white thread –
but did manage to inseparably seam
her birth day to her father’s burial
and reinforce the promise
‘in sorrow thou shalt bring forth children’
– no greater sorrow has been! –
as the shooting ceased
and Maisun called out for Muhamad
and the terror or the excruciating pain
twisted her voice
(‘Breathe slowly and deeply,
find the most comfy position,
think of something nice and pleasant,
ask your partner to dim the lights,
play your favourite music,
gently massage your lower back’)
and he, suddenly, stopped answering,
for if you haven’t seen Maisun’s photo,
her hands quivering over her daughter,
pink, calm, innocent
the way newborn babes are
– however, she was lucky
to have given birth to her on the hospital bed
rather than crouch like her sisters before her
like an animal in front of the soldiers
and then stumble ten kilometers,
walking and bleeding,
carrying the dead infant as an offering –
if you haven’t opened a non-aiming eye
to look at Maisun El-Hayk’s face,
you’ve never seen
bringing children forth in sorrow.

Translated with the author

Published in Series 3 No.9 - Palestine 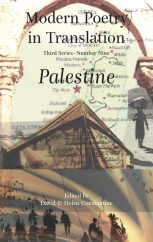