it’s certain you can’t stay here. certain
too that you ’ll never get out. you’re
stuck here for certain, not one for travel
nor one for leaving, though one day you’ll
have to go but that’s still so far off just
as everything is far off that stays hidden:

those old familiar pains in your head again
and the fact they won’t disappear,
not at home and not in the south that
stays hidden too, no matter how far away
you go looking, no odds, south is always
south. South dressed to impress. South
in the wind, at the wide open window. a child.

it is certain that it will all still be there.
even after sleeping in yet again, forgetting
you as I slept and then forgetting myself
and the late-film from yesterday night,
even after all those things that disappeared
without trace the day before yesterday, the
minute I looked away: knife, fork and scissors
and the light from the fridge and the salt
from the bread, and the plot, and the thread,
the smell of my own body, and even that nothing
was certain, that of all things was still there. 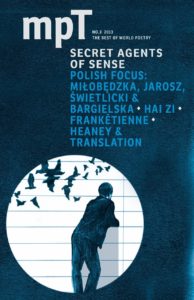