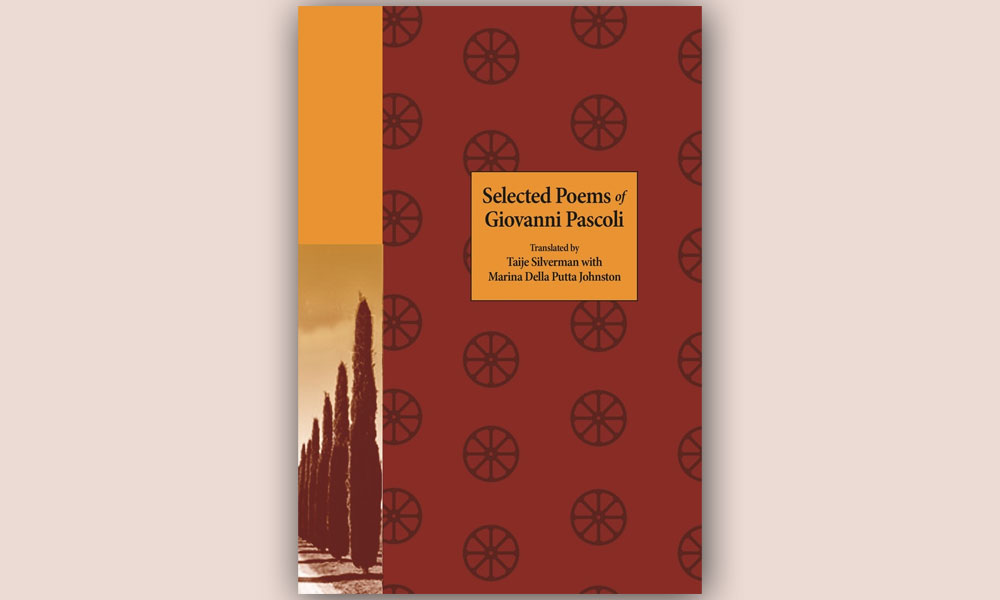 This bilingual selection from the work of the Italian poet Giovanni Pascoli (1855-1912) is a welcome addition to Princeton University Press’s excellent series, the Lockert Library of Poetry in Translation. Alongside a generous sampling from the full range of Pascoli’s poetry there is a substantial introduction, a chronology of the poet’s life and times and a detailed appendix giving background information to many of the poems and guidance on the various metres used in the Italian originals. Although many anglophone readers may have some familiarity with the work of Eugenio Montale, say, and may at least have heard of Quasimodo, Saba, Ungaretti, few are likely to be familiar with the name of Pascoli. However, in his homeland he is an influential and much-loved classic. In his helpful introduction, Silvermann quotes the poet and film-maker Pier Paolo Pasolini: ‘Ultimately, the poetic language of this century is derived from the work of Giovanni Pascoli, contradictory and intricate as it was.’

At first glance such an estimate may surprise the English reader. Pascoli is very much a rural poet whose poetic career coincided with that of the English ‘Georgians’, poets whose work was swept aside by our own ‘Modernists’. He does, however, also have much in common with his more gifted contemporaries: Hardy, Frost, and Edward Thomas. Here he is in ‘The Winter Wren’:

Winter comes. With your call
comes the sealed dry well
of cold; you look like the shell
of a nut dropping, click; it’s
The cricket who taught you to trill
with its wing flit and whir …

There is clearly a similarity here between the stoicism evinced in these lines and that of Hardy’s great poem, ‘The Darkling Thrush’. Similarly, Pascoli’s poem. ‘Owl’ is likely to remind many readers of Thomas’s poem on the same subject, where the bird’s call is heard against the backdrop of a bleak landscape: ‘Lightning gusts | broke black clouds | and a call came from the fields: | hooo …’

Evaluating Pascoli’s influence, Pasolino uses the word ‘contradictory’ and it may seem that the poet’s right to be considered a founding father of modern poetry is undermined, not only by his rural inspiration, but by his ‘localism’ or campanelismo, that peculiarly Italian identification with the region, town or village in which one was born. Moreover, Pascoli had a difficult upbringing in which he lost his parents and elder siblings when he was quite young, so that his work is frequently suffused with nostalgia for a lost world of innocence. This is conveyed in ‘Back Then’, a poem in which the translators have worked hard to capture the musicality of the original:

That year. All the years now done,
all the years to come, and you can’t
my thoughts, you can’t bring
any year but that one.

One detects a similar sense of longing in ‘Birthplace’:

Dream of a summer day …

However, one is also struck here by the poet’s affinity with the Imagists and William Carlos Williams’s dictum: ‘No ideas but in things.’ What is impressive in so many of these mostly quite short poems in Myricae, his first collection, is the precision of his imagery. In the final couplet of ‘Puffins of the Adriatic’ we see how ‘a line of little trawlers sways | on the slickly varnished sea.’ In ‘From the Shore’, we catch ‘a sudden gleam | of light like a shimmer of chainmail.’

Sometimes these brief lyrics have been grouped into longer sequences as in ‘The Last Walk,’ where he evokes simple lives in harmony with nature. Here is the opening of ‘Hens’:

Unlike us fools, the farmer’s wife
won’t weep a tear for falling leaves:
shrewd roosters guard her henhouse;

In ‘Laundresses’, as so often in Williams’s work, he captures the essence of an object: ‘a plow without oxen or strap | sits in a field half gray, half black. | In the mist, it looks forgotten’. In ‘Huddle’, there is a sense that this self-contained world is under threat: ‘Fast, before indifferent eyes, | the huge, black train roars past.’

After the incisiveness of Myricae, the poems gradually become more expansive. His great poem, ‘The Kite’, which Pascoli himself thought his best, stretches out through twenty one stanzas of terza rima. It is hardly surprising that it was also admired by Seamus Heaney, another poet skilled in evoking the haecceitas of objects, who not only translated it but went on to write ‘A Kite for Aibhin’, his own original poem inspired by it. From its Proustian opening, the poet is drawn back to memories of childhood and the exhilaration of flying a kite with school friends:

There’s something new in the air today,
or rather something ancient. I’ve moved
away, but sense the violets blooming

It flies, catching the boy’s quick breath,
and restless feet, and eager eye, and face,
and heart – and lifts them to the sky.

Giovanni Pascoli does not clamour for the reader’s attention. His effects work their magic slowly. He is a poet with eyes wide open and ears attuned to music of words. His ars poetica is a kind of inspired passivity, as exemplified by these lines from ‘The Idle Poet’: ‘The poet looks | and listens in, | and listens in, and loves it.’ On the threshold of a new century, he was an eminently sane influence on the poets who were to come after him and, in spite of his somewhat premature death, a significant voice in that astonishing efflorescence of twentieth century Italian poetry.

David Cooke is a serial linguist who has published seven collections of his own poetry. He is the founding editor of The High Window, a quarterly online journal of poetry and translation.