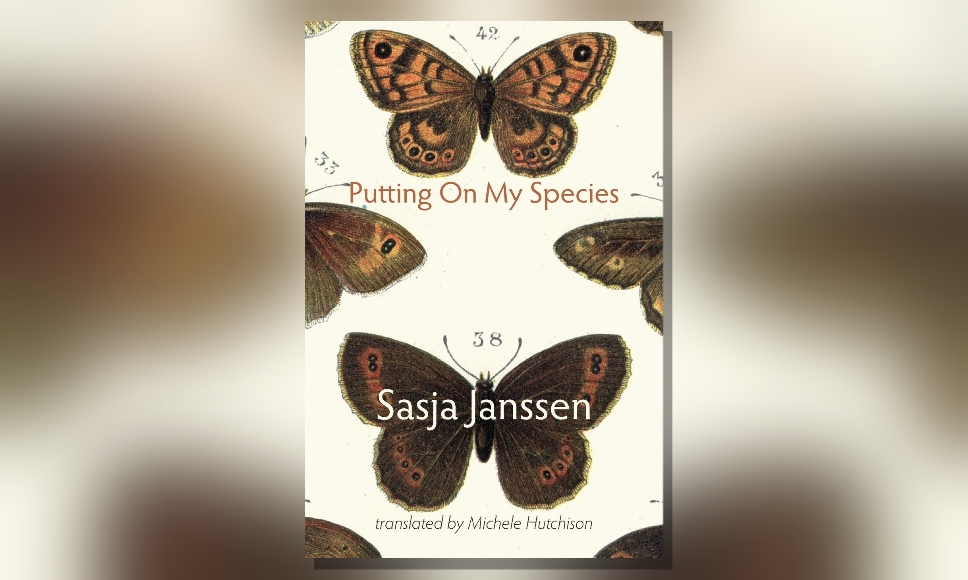 Putting On My Species, by Sasja Janssen, translated by Michele Hutchison, Shearsman, 2020.

The others stared at the way I was, that there was nothing
left of me, should there be a remnant of me or something?

The voice of Putting On My Species moves through registers of the ‘I’, as Sasja Janssen interrogates the particulars of living, as a woman, as a mother, as someone who gets it wrong, who triumphs, who gives up. The notion of putting on a ‘species’ implies a universal behind these particulars of everyday life. It begs the question: what – or whose – species is being put on? And a subsequent, performance-oriented question: through what acts can one assume a whole species?

Janssen thereby places a proscenium frame around acts of living: ‘Yes, this poetry, everything is staged’ (‘Enough poems about me’). Caught in the web of Janssen’s self-reflexivity, Janssen’s speaker cannot say with certainty that she exists beyond her performance of existence: ‘should there be a remnant of me or something?’ (‘Putting on my species’). I don’t envy the task translating these philosophical subtleties. This is poetry that wants to jar, that wants to feel a little awkward and off-kilter, as the selfhood of the speaker is displaced. Michele Hutchison has taken care to translate these poems to allow for a processual and grammatical disruptive syntax that will carry this philosophical discussion. Take for example the title poem ‘Putting on my species’:

I wore a swaddling cloth that would become a shroud
it’s possible, yet it is so.

The speaker reflects on a life-narrative as ‘possible’, implying that the journey from ‘cloth’ to ‘shroud’ could or might have been. The interjection of certainty with ‘it is so’ throws the line off-balance, and the reader is shifted from overhearing an ‘I’ considering their life, to asking, ‘who is speaking? Is this ‘I’ more than itself?’ The flow of ‘could be… could be… could be…’ equally throws this self into question.

This question soon centres on the notion of gendered voice – not restricted to vocal acts, but gendered selfhood, self-perception and gendered ways of being or having affective agency: ‘I am my sex’ (‘I am my sex’). It was reading such lines that I began to find the collection somewhat too jarring. The construct of gender gives way to the implied category of ‘sex’. Lines such as ‘I am my cunt’ carry the implication that the performance of gender adheres to or naturally follows sex. I find this insinuation troubling. Sex is no less performative than gender – in fact, to understand gender as a construct we can subsume the former under the latter. I wanted to know if Janssen’s references to a ‘cunt’ were critical and ironic, couched within gender theory, or if sex really is being construed as discrete, as some kind of ‘species’?

What I found in this search was invariably the challenge of reading in translation. Was I missing something from the Dutch – some subtlety of the word ‘sex’ that cannot carry into English? I felt caught up in the way gender constructs carry or do not, across languages and cultures, and I didn’t feel positioned to find an answer.

With the benefit of this doubt, the exploration of gendered life as a kind of performance that a body or person ‘puts on’ is delivered with a dry and sardonic tone, one that I really enjoyed whilst reading. Janssen is deft at showing unabashed feelings of failure and guilt – ‘I was instantly less good at living’ (‘Putting on my species’) – whilst Hutchison has effectively translated their dark humour. Even where the deployment of the word ‘sex’ troubled me, I enjoyed Janssen ridiculing a woman’s disturbed self-regard – ‘the seams of my sex | tangled like wool washed too hot’ (‘The stitches’).

The highlights of the collection were moments where I felt Sasja Janssen show how much ‘putting on’ gender means adopting a particular stance toward the natural world. At several points, she alludes to a tie between a woman’s arousal and movements of nature:

The surging is not so simple, the light is, it allows itself to be caught.
I am so turned on.

(I can’t take it, that fuss about life and death)

I was really interested to read these lines. Janssen captures a historic assumption that women are attuned to or closer to the ‘natural’ world – and taps this to create the interplay between ecological arousal and womanhood. It made me wonder whether women are seen as a key or solution to ecological disaster. And wonder what women are meant to do with that assumption of responsibility?

Penny Newell won a Northern Writers’ Award 2019. She is currently a New North Poet. She received a Pushcart Prize 2019 nomination from the editors at The Portland Review. Penny has worked as a writer for the British Red Cross and the National Literacy Trust. She is involved in queer studies and activist groups.