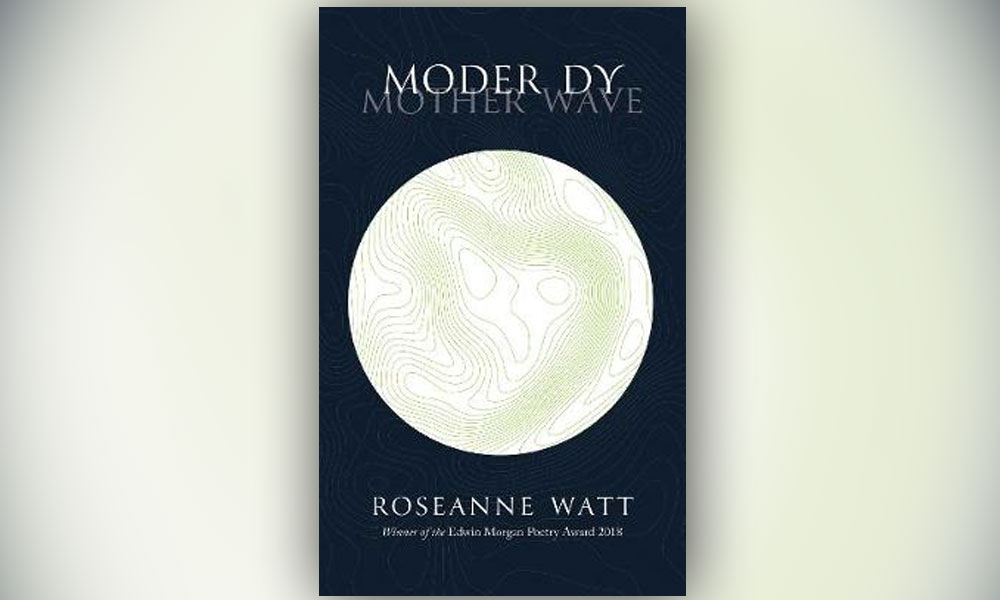 In Moder Dy, Shetlandic poet Roseanne Watt explores the forgotten art of steering by the moder dy (mother wave), the name given to an underswell which is said to always travel in the direction of home. From the fascinating haaf-language used by fishermen on the deep sea to ward off misfortune, to the ancient burial formula unearthed on the island of Yell, Watt captures the magic and mystery of the Shetlandic landscape and language.

Behind the beauty, however, buzzes a deep-rooted anxiety attached to pronunciations and the prescriptive rules of orthography: ‘Lass, you’ve parched your tongue of your own land. | ‘Propered’ your words so dry they sift between | your teeth like sand flitting down an hourglass’, laments the speaker in ‘Salt in the blood’. There’s a clever double meaning here as the musical structure and symbol of the wave curling its wet mass upon the sand becomes a sounding board to examine the intimate similarities between song and shame:

I gave you a language, one that could capture
the percussion of waves on its consonants,
unravel the threads of the soul with a single word:
shoormal, mareel, bonhonga;
a gift that you’ve left out to moulder in the gales.

The oppressive ‘dead weight’ feeling of being judged by others is captured most memorably in ‘Speaking Shaetlan’ with the image of a mouth jammed shut with stones (‘pretend your mouth is full | of stones. || Feel the dead weight | pressing | on your tongue’). Impressively attuned to the materiality of language and the stakes of speaking – or sculpting – language in this distinctive way, Watt handles her words with care. She commands the page with sparse and spacious movements, cautious that her words will ‘shatter | on impact || anything | which they struck, | how they could break || like bone, | or bread.’

Shaetlan has no standardised orthography and depends upon a speaker’s preference. Even the title Moder Dy, we are told, sparks discrepancy over its pronunciation. However, this space for deviation is where the magic lies. There’s a curious landslide of meaning that occurs at the end of each line when Shetlandic words bear uncanny resemblance to English words, for example, ‘bölliments of history’ (‘the odds and ends of history’, rather than the ‘bollards of history’), ‘kokkel’ (‘compass’, not ‘cockle’), ‘blinnd’ (‘a dim light; a short sleep’, rather than ‘blind’) or ‘wirds’ (‘words’, although this could easily become ‘word-birds’ to the nimble-minded).

The way in which the speaker forages through the natural landscape foregrounds this exciting possibility for parallel interpretation, especially when the speaker alludes to ‘an absent world | caught between | seaweed and old nets’ (‘Raaga Tree’) or catches sight of a series of oil rigs – ‘floating fairgrounds’ to the more inventive – ‘which | lit | the far corners of our | knowing, and which we never | spoke of – observing | their passing in silence’ (‘The Oil Rigs’). A generous glossary at the end of the book enhances this glee of decoding, when words are measured up against their meaning with often unexpected yet inspiring results.

The continued layering of landscapes in these poems, corporeal onto coastline, attests to the speaker’s delightfully close connection to their natural surroundings: the skin is styled as seabed in ‘Ix and The Octopus’, the memory as a nest in ‘Arctic Tern Skull’, whilst rock gains flesh and lichen-scars in ‘Lichen Leid’. This imaginative cross-mapping also demonstrates how the vernacular of the Shetland Islands itself actively reflects its environment, and how, in this sensitive and searching collection, each word contains a wildness inside.