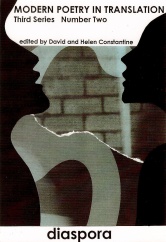 ‘Diaspora’ in its editorial and in most of its contributions addresses exile, wandering and the struggle for a language abroad. It publishes important essays by Carmen Bugan (Romania, USA, UK) on learning a new language in exile and by Goran Simic (Bosnia and Canada) on ‘Exile as Homeland’. There are translations of poems by Adel Guémar (in exile from Algeria), Ziba Karbassi (exiled from Iran) and Volker Braun, an East-German poet notably disappointed by life in a united homeland. Publishing Paul Batchelor’s versions of Ovid, the Editors effectively redefine the ‘modern’ in Modern Poetry in Translation to mean any new (and lively) translation of any poetry however old. So frontiers of time are crossed as well as those of space.  The languages reperesented here are Modern Greek, Farsi, Polish, Bulgarian, French (Algeria), Hungarian, Latin, German, Norwegian, Italian.  ‘Diaspora’ is the first issue in the Third Series to carry reviews and the first to have a cover – at once very striking – by Lucy Wilkinson.

‘Diaspora’ was reviewed by the Guardian, here.