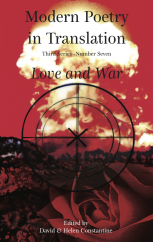 “Love in literature…has from the first adopted the imagery of war to say what it feels like and to describe and further the lover’s means and ends” is how the editors open their introduction to this enthralling issue of Modern Poetry in Translation. But they strike a more sombre note to close, “Love played with the language of war; war and belligerent capitalism hijack the language of love and sex. It matters what language you use.”

For the contributors to this collection, it was language which made them dangerous, whether it was Ritsos in exile while under the Papadopolous dictatorship writing 333 monochords in one month which speak simply deadly truths:

“They hauled down the flags. Went back to their homes. They’re counting their money”

or Federico Garcia Lorca, writing 10 years before the outbreak of the civil war, in his invention of an assault on a gipsy city:

“Where they stop, they impose
the silence of dark rubber,
and fear, fine sand on the spine.”

Still in Spain, Manuel Rivas, Galicia’s best-known author internationally, whose brilliant novel The Carpenter’s Pencil prompted Günter Grass to say that he’d learned more there about the Spanish Civil War than from any history book, is represented with a luminous selection of six poems, beautifully translated by Jonathan Dunne.

Also internationally renowned, author of one of the great novels of the twentieth century History, Elsa Morante appears here in a fine translation by Christina Viti of the opening section of ‘The World Saved by Kids and Other Epics’, which she commended to young people: “the only audience which might still be capable of listening to the word of poets.”

Other great poets in skilful translation include Pushkin, the Chinese poet Du Fu (712 –770) and the Russian Elena Shvarts.

READ POEMS FROM THIS ISSUE ONLINE (5)

My Lou I shall sleep tonight…(extracts) from Poèmes à Lou, Xxxii Translated by Stephen Romer

A Scene in Spring Translated by Paul Harris

Kolin' after Liliencron's 'Wer weiss wo' Translated by Oliver Reynolds

Ballad on the Western Beaches Translated by Jonathan Dunne