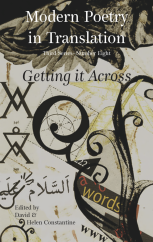 “Poems are bread on the waters, messages in bottles, they may land anywhere.” In this issue, the editors examine translation in a very fundamental sense: getting yourself across.

The foremost contemporary Basque poet and novelist Bernardo Axtaga is featured, with two poems from the first of his novels Obabakoak to be published in English translation. Nobel prize winners, the Chilean poet Gabriela Mistral appears with a powerful poem ‘The Foreigner’, and Swedish Harry Martinson with ‘News’:

Bottle
with the note itself as passenger
bobbed in the North Atlantic
for seventeen years.
Silently and continuously referred
to a giant steamer from Southampton.
Ran aground and froze in
in the ice round Labrador.

There are tributes to the great poet, essayist and translator Michael Hamburger together with four of his poems and twelve of his translations of the poems of Robert Walser.

Other delights include new poems from Jenny Joseph, Pascale Petit and Oliver Reynolds and a reviews section in which new translations of Rilke by Don Paterson and Martyn Crucefix are examined.

READ POEMS FROM THIS ISSUE ONLINE (4)