Queen of the Morning Queen of Sheba
where does the bird of Simmorg-Anka live?

And Ethiopia I was your jumble
aching with burnt incense and anger
in Saint-Giorgis
great brown frenzies of kisses scraped
the worn doorsteps of God and his brass door-locks
in Baata, Menelik slept
at his door we crossed black with blue
a Galla was my masked destiny
fierce and sweet as his spear

Queen of the South Queen of Sheba
here lies the bird of Simmorg-Anka!

and suddenly Africa spoke
for us it was Year Nine, Year New
Africa by custom
swept our doorsteps with a flaming brush
took the hunted night
and all the mutilated nights
of the bitter tide of tormented negroes
and tied them together
under the purple open sky pricked out with fires

She said: ‘the man with his gun still warm
died yesterday. Yesterday the endlessly greedy man
the most trampling trampler the most plundering plunderer
yesterday he died for good!’
… and Africa spoke in a sacred language
where the same word signified
rain-knife bull’s blood
nerve and tendon of the hidden god

thick lichen the release of birds

Published in Between Clay and Star, 2013 Number 2 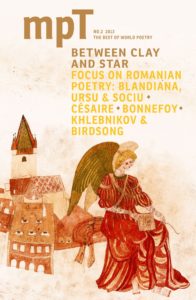