A moon will rise
She will be the core of night          the core of darkness
A moon of darkness will rise
A round moon will rise, with a hole in the middle
She will take, she will take you
She’ll take a live light          as a wife          as a queen
A stranger she’ll come from a dark place with blurred invisible boundaries
She will rise
A moon who’ll place her feet across          my grave she’ll rise
Ancient, a child, dark and young together
She will rise to take your life
She will rise in the bazaar          in          low places
Flames as her weapon
A black moon will rise and strike you across a veil
She will pierce through you
And you will be slashed open          slashed and cut to pieces and you’ll fall
You will go to a shoreless sea
Sleep within a virgin death

And then, then, from the core of darkness
The unknown moon will rise, the hollow moon          the brimful moon
The virgin moon          the moon with unimpossible lips
She will know no fear
Playing her part and making parts play for her
Both visible and invisible
Against the backdrop of dark
A moon with spells of pure colour
Of unpainted eyebrows
A journey through the night          a banner of rainbowed sexes 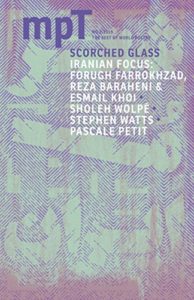