What you haf to imagine is a nah-sty, stinky
little street, with loads o’ people, tinkers,

dockers, barra boys the lot, all living a dire
tedious existence. We never ’ad a care

in the world though poverty was rife,
because we was kids and we lived a life

in the middle and three rooms down with a yard
where all you had to do was go to the kahzee.

Right, so it’s Guy Fawkes night and these days
it don’t carry the same significance that it had.

There was about eight kids including me
up on the roof, cos that was a place we’d play

which was a little general shop that sold fags
and sweets, rubber johnnies and also bangers!

So Jimmy’s been in and grabbed an ’andful
of these crackin’ fireworks, ‘flashguns’

they called ‘em and they woulda cost an ’alfpenny
each, and we’re on the roof, got a little bonnie

goin’, an we’ve tied about five o’these flashguns
into a little bundle and Jimmy’s flung ’em

on the fire for a mo’ so as to light the end,
and he’s got this little bomb in ’is hand,

and she was rough, she lives downstairs. So Jimmy’s
lobbed the bomb down the very first chimley.

Well, within seconds there’s a huge great bang!
The chimley pot blew up, all the brickwork sang

through the air, missed us by inches as we rushed
to peer over the front. And there’s Mrs Ruff!

She was covered in bleedin’ soot from ’ead to foot!
Oh she was in a terrible state. We’d set fire to the cat

and her dinner’d been blown right across the kitchen.
But being kids we didn’t know what we’d done,

so we all scuttled down our trapdoors that went
to our own compartments in that beau-ti-ful tenement,

with the air of innocence all over us.
When ’er three sons came ’ome from work, there was

Sammy Ruff, Billy Ruff and Bobby Ruff
and they was rough, two of ’em worked shifts

that blew their mum right across the room
and spoiling their dinner when they got home too!

That was Wilmer Gardens, where we lived in ’Oxten.
So what d’ya reckon about that one, then?

Published in Series 3 No.16 - The Dialect of the Tribe 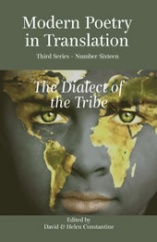