His identity was always wandering, and though it
was as a lackadaisical dandy that we knew him first,
the old bottles filled with new wine:
then he was an actor, then half a poet,
later on a mechanic, in a motorcycle gang,
though only a minor cog in its design,
then a businessman, then with a (thinning) ponytail again,
appearing in constantly changing shapes.
But when drunk he very precisely with his knife
would carve into his arm his beloved’s name,
so that repeatedly, over two decades, it came
dripping onto the table, always the same,
the living letters a blood-red flame
welling from themselves, from the scar of her name. 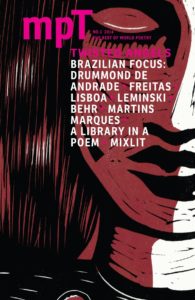