In winter, my brother used to live
in a hut by the lake
near a thicket of stiff reeds.

The ice was thick and hard as stone.

He was working on a big painting
that he called ‘The Mother’.

Day by day he would add another intricate
detail, a picture symbol,
to the spill that slid downhill
in a landslide shaped like a fish.

In spring, when the frog-eggs had hatched,
he would scoop up the black teardrops
and feel them wriggle between his fingers.

In December the ice would be covered with cuts.
The laughing children would be skating.
The sound of their blades drilled into his ears
like the screech of chalk on a blackboard.

He remembered boys throwing stones at his dog,
a creature who could not break his chain.
Unable to help him, my brother had wept.

In winter to mix his paints, he broke the ice with an axe.
Then he lowered a jam jar into the hole.
As the jar filled, his hands turned bloodless white.
He felt dead tadpoles wriggling between his fingers..

With his eyes squeezed shut
he touched his brush to the canvas.
Now he was an ancient Chinese Master,
now, a drunken painter from India,
a homeless Japanese poet,
a Mongolian zither-player.

My brother was a magician.
When I was a child he took my hand
and led me into the libraries of night.
He told me, ‘Look at this.’

He pushed his sleeve up and showed me
welts from deep scratches made by the cat.

‘This wound says that there is something
that cannot be seen. It stays silent as it speaks to us.
Do you see those books in the shadow?
They are yours.’

I was silent. I understood:
the dream of art is possible and terrible.
We cannot reach the other side as we were
before we saw the void.

Day after day in the whiteness of winter
my brother looked into the void.
Day after day the grate of the skate blades
like the scratch on his throat
from the night when the cat
attacked his jugular and he bled litres.

With tears in his eyes
my brother lay on his bed
gazing into the void.
He muttered to the ceiling,
‘I am a monster.’

Day after day, my brother worked on his painting
which, for him, was an avalanche.
At night, he slipped between the sheets
with a cigarette in his mouth
ready to set fire to himself.

He would speak in Arabic
and the language of the dead.
He studied the singing of the birds
and watched the dawn of the Resurrected
while remembering the Absent
who had a name and a story.

One day my brother left his hut
as if leaving his mind.
He took a chunk of ice

edged like a blade
and showed everyone his severed head,
which was singing and watching shadows
that were travelling on the other side of the water.

He told us,
‘I can’t take it anymore.
But you, be of good courage.’ 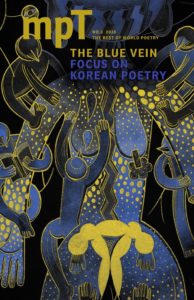