What I like about other people’s apartments is that the way
objects are arranged in space is given, I can only
watch them be.
In my own apartment what makes me nervous is the opposite –
nothing is definitive.
As in life. Fragile, vulnerable the way things are
today.
I could, theoretically, move anything
at any time. My things, clothes, wardrobes and tables
are suffused with the provisional nature of my existence
here on earth, with my uncertainty, my mortality.
I uncritically accept all aquariums belonging to other people
(as long as there is no plastic castle inside)
only my own aquarium I cannot come to terms with, it appears
dark, its dirt falls on my head
I witness dying fish that I then
have to throw into the toilet
the flowers in it have to be endlessly moved around
replaced with new ones because they turn yellow.
Yet, I keep it alive for years, buy
new fish, keep them warm, clean the sand and stones
unable to stop. Of course, until it cracks
and the water pours out I will never voluntarily
abolish my aquarium.

Kateřina Rudčenková 1976) is a poet, prose writer and playwright. Her debut Ludwig (1999) and her second poetry collection Není nutné, abyste mě navštěvoval (It Is Not Necessary for You to Visit Me, 2001) established her as one of the most interesting voices in contemporary Czech poetry and introduced the hallmarks of her style: direct, sensual, erotic, but also self-ironic and playful: ‘Yes, I live inside a piano, but it is not necessary for you to visit me.’ Her poetry speaks from a female perspective, yet referencing quintessentially male influences such as the modernists Bernhard or Jandl, with an unflinching acceptance of the fundamental ‘aloneness’ and absurdity of human existence, but also with an acknowledgement of the absurd as a dadaist and surrealist legacy.

Her early work secured her a place in two anthologies that introduced her to English language readers in the mid 2000’s: A Fine Line: New Poetry from Eastern and Central Europe (2004) and Six Czech Poets (2007), both from Arc Publications. The latter contained poems from her third collection Popel a slast (Ashes and Pleasure, 2004), including the title poem: ‘Peace is in the dying that shrouds us. Mist over the woods, slow conversation, slow walk, us.’ In the same year, she published her short story collection Noci, noci (Nights, nights) which, like her poetry and plays, speaks of a young woman’s desire and of the frustrations, tensions and disappointments of male-female relationships, while it forefronts the roots of her sensibility in emotional traumas of childhood and youth, as in the story ‘Forest’, included in Povídky, the anthology of Czech woman’s short fiction in English translation: ‘Destructive dreams about Mother, erotic dreams about Father … In my dream I saw Mother devoured by flames. Lying on a grassy hill, she kept sinking through the earth.’

Her fourth collection, Chůze po dunách (Walking on Dunes, 2013),came almost a decade after her third and won her the prestigious Magnesia Litera Award. The dunes of the title reflect the location where most of the collection was written, the coastal town of Ventspils in Latvia where she spent time in the International Writers’ and Translators’ House. Walking here becomes a ritual that calms and allows for reflection, ushering in a less exulted, more reconciled tone. But walking and movement are also the key themes carried over from previous work: always trying to reach the point hidden beyond the horizon, literally avoiding ‘stasis‘ and the restrictions of a life determined by responsibility towards anything else than the imperative of inner authenticity.

Published in The World for a Moment, 2020 Number 2 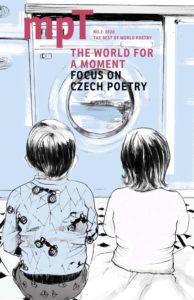