One day I climbed inside my body’s cave
Homeless, my hair electrified with terror
I walked inside that desert
Where sleeping lions lean against each other like cathedrals
Their spines aurora borealis
Their mouths and eyes stoppered
With a Niagara of sand,
Where only desert nomads know the burning of soft snow.
In my body’s cave I found a hermit
Dead, undecayed, with hands mirrored in prayer on his breast
His face turned towards the sunrise;
I touched him and breathed in the gunpowder dust.
The lions had not devoured him
The vultures had not picked clean his bones
The snakes had not spun themselves around him
Nothing would feed on that scentless corpse
Resting like an ancient foetus.

I watched him as a woman’s savage cry cut through me –
Who gave birth to you amongst lions forgotten by God,
Who can hear you crumbling in the emptiness,
Who can feel you burning like a torch wrung inside out,
Coarse diamond hermit,
Your beard growing further even now, past the soles of your feet
Your beard that will be my bed for as long as I am shuttered here
Or if I never leave
The beard that will be my wedding dress, my virgin death.

Ruxandra Cesereanu is one of Romania’s foremost literary figures, having achieved international acclaim as a poet, novelist, essayist and literary critic. Her attainments have been noted in Who’s Who in Contemporary Women’s Writing and The Columbia Literary History of Eastern Europe since 1945. Cesereanu’s body of work ranges from her exploration of femininity and eroticism in her poetry and prose, to an engagement with Romania’s communist legacy in her essays and journalism. Three of her poetry collections (Schizoid Ocean, Lunacies and Crusader-Woman) have been translated into English.

Reflecting on ‘The Cave’, Ruxandra Cesereanu writes that: ‘the poem was written in a stage of mortification and asceticism, once, about 15 years ago, for personal reasons. At its end, these emotions become shy and subdued, I think.’ In the poem, Ruxandra expresses this state of mind through a series of surrealist images, typical of the Onirist movement, a postmodernist Romanian literary school which emerged in the 1960s, and which is seen as an influence on her work. Ceseareanu coined the term ‘delirionism’ to convey the process of recreating hallucinatory experiences in her poems, which can be recognised here as her ‘body’s cave’, stretching out into a ‘Niagara of sand’, populated only by the ‘scentless corpse’ of a hermit, becoming a vivid symbol of the spiritual ‘mortification’ she describes. 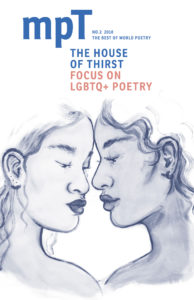