While he played at war, the way children play,
making their guns out of any old thing –
who knows, from sticks of rice
or maybe even from a rose –
he grew up on love,
fired up with its furies.
And then one day
he signed up to die
in the place he wanted to die,
saying: ‘I happen to be unafraid
of dying among trees and birds.’

That day, his gun was a rose
fired in the air. The rose was dangerous,
and the sun was the sun and the river was just
a river, but this time the game was war.
Death came out of that little brook, death rose
against his little gun (which on that day was only a rose)
but this game was war, and the sun was the sun
and the river a river, but this verse exploded
like a grenade. It opened like a rose, colouring
the waters of the river, its roots ran red
along the banks of the river, it settled like dew,
it felt like rain, or like the waters of a flooded
river, it opened up the broken veins
of the river, just as it then opened up
the breast of the poet.

He is still winning that war with his rose,
with the mouth of that river, its birds and its trees.
That day he played at war, the game that men play,
and he made his gun out of anything, or anything
that wasn’t a gun. That day he was armed with a rose.
The poet’s gun is just a rose.

The three poems translated in MPT 3/14 Polyphony are taken from the works of two key figures in twentieth-century Peruvian life: Chabuca Granda and Javier Heraud. Chabuca is the single most important figure in the history of twentieth-century Peruvian music: her most famous ballads (‘La Flor de la Canela’, ‘Fina Estampa’, ‘José Antonio’) are a lyrical celebration of Peru itself, with its Inca heritage and its mixed population of indigenous peoples, mestizos, criollos and Afro-Peruvians. Over her long career, she first created and then transformed Peruvian popular music, giving it a depth and a fluidity that has enabled her songs not only to serve as a commentary on what it means to be Peruvian, but even to become themselves an essential part of that national identity. She remains the benchmark by which today’s Peruvian musicians are measured. In recent years, Susana Baca and Eva Ayllón have both enjoyed success with covers of Chabuca’s songs, including versions of ‘El fusil del poeta’.

By contrast, Javier Heraud is remembered as much for the senseless tragedy of his violent death as for his precocious talent: an award-winning poet by the age of eighteen, he was shot dead by the Peruvian army at the age of twenty-one during a hare-brained attempt to instigate an armed uprising in the jungle close to the border with Bolivia. The manner of his death prefigured that of one of the figures he most admired: Che Guevara was killed by the Bolivian army in similar circumstances just four years later.

‘El fusil del poeta es una rosa’ is one of a series of songs Chabuca wrote in homage to that precocious but doomed young poet. The lyric lends itself both to translation and to adaptation as an on-the-page poem: its structure is remarkably free-form, given that it is a song, and its rhythms and cadences are shaped by the narrative of the event, rather than by any formal constraints. Although the song has a clarity that enables it to speak directly even to a reader/listener who knows nothing of its historical background, some knowledge of Javier Heraud’s brief life and work helps shed more light on Chabuca’s words, and not least the allusion she makes in the opening lines to one of Heraud’s seemingly most prescient poems. ‘Simplemente sucede,’ she sings: ‘It just so happens…’ The force of this otherwise innocuous-sounding half-line is a reference whose force depends on its listeners’ familiarity with Heraud’s ‘I never laugh about death’. It tells us a lot about Peruvians that Chabuca could expect them to know exactly what she was talking about.

The story of Javier Heraud can be quickly told. Born into a well-to-do liberal Limeñan family (his father was a prominent lawyer), at the age of sixteen Heraud became the youngest ever high school teacher in Peru, teaching courses in Spanish and English at two high schools to subsidise his own university studies. At the age of eighteen, he published The River (1960), the collection of poems that made him famous, and for which he shared (with César Calvo) an award for the most promising poets of their generation. In 1961, he published The Journey, which resulted in an International Youth Forum travel bursary that would change his life, taking him to Moscow, China, France, Spain and eventually Cuba, where he attended a course in cinema. These experiences shifted his politics further left: the young student who had demonstrated peacefully against Richard Nixon’s 1961 visit now called himself a revolutionary. Alongside six similarly middle-class boys from Lima, in May 1963 he headed for Madre de Dios river, close to the Bolivian border, intending to encourage the local peasantry to join them in an armed uprising. All seven young men were shot dead by the Peruvian army, who believed they represented a much larger Soviet-backed force on the far side of the river; twenty-nine bullets were recovered from Heraud’s body. He was just twenty-one years old.

Chabuca Granda’s ‘The poet’s gun is a rose’ neither glamorises Javier Heraud (she sees his disastrous foray into armed revolution as an extension of a children’s game) nor belittles his achievement: ‘He is still winning the war with his rose…’ The song contains a sense that bullets may be more powerful than words on a battlefield, but that words will win out in the long run. She wrote and recorded it in 1968, a few months after Che Guevara had gone to his own death in an equally futile attempt to instigate an armed rebellion among the peasants of Bolivia. Che Guevara’s image remains iconic among left-leaning youth all around the world; the name of Javier Heraud carries a similar resonance in twenty-first century Peru.

These three characters, in their various ways, seem so rooted in a distant and turbulent past that it can come as a jolt to realise that all three could very easily have lived to be part of our present. Chabuca Granda died of heart complications in 1983, after a career spanning half a century; had she lived, she would have been just ninety years old today. Che Guevara would have been eighty-two – a little older than President Raúl Castro, and a little younger than his brother Fidel. Javier Heraud – who died in a hail of bullets almost half a century ago – would be celebrating his seventieth birthday in 2012.

Presented in MPT is a translation of Chabuca Granda’s ‘El fusil del poeta es una rosa’, followed by versions of two of Javier Heraud’s best-known poems. The first, ‘El río’, is the title poem from his prize-winning debut collection. In the second, ‘Yo nunca me río de la muerte’, Heraud envisages and accepts the idea of his own death. This is the poem to which Chabuca makes reference in her lament for the young poet.

Readers may find it interesting to see some quite rare footage of Chabuca herself singing another of her songs, Fina Estampa (Handsome Face). She’s 53 when this TV recording was made. http://www.youtube.com/watch?v=ggqPjptuxps (Coincidentally there’s a Peruvian restaurant, named after this song, near Tower Bridge in south-east London.)

I’ve also found the following homage to Javier Heraud consisting of photographs of the poet with a soundtrack of two Chabuca songs dedicated to the poet (including El fusil del poeta): http://www.youtube.com/watch?v=ASQneSBKlCQ

Maybe the best interpreter of her songs is Eva Ayllón, who gave a concert of Chabuca’s songs in Buenos Aires last year. Excerpts from this concert can be found here:http://www.youtube.com/watch?v=gMs9yJTKi5o&feature=related

Published in Series 3 No.14 - Polyphony 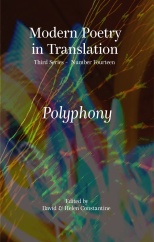