Is erring human,
isn’t it divine?

And shame,
shouldn’t that be the only truly divine emotion –
heavenly shame,
the reason why the divine makes itself small,
conceals itself
and pulls its immortal grey hairs out of its
grey immanence, in the dark,
while we bow our heads and whisper
that we forgive,
that we don’t blame it in any way –
we wouldn’t dare –
and that we too err from time to time?

The source texts of the two poems presented here* are from the Dutch collection Hemels en vergeefs (Divine and in Vain), published in 2002 by Querido, in which Tellegen characteristically plays with Dutch proverbs and expressions, though not, as he sometimes does, in the form of a sequence.

As is true for many of Tellegen’s poems, ‘To Err’ is dialectical, made up of philosophical, generalised questions and statements – not normally ingredients that allow for dynamic poetry. And yet the poem’s immediacy, its ironic twists and turns, and the absurdist way in which the abstract, the divine, is made concrete, lift the poem out of the realm of mere statement.

The tender poem ‘Daughter’ reads as a tribute to a strong character, possibly still a child, who is beginning to explore the world. She refuses to circumvent difficulties, and life begins to open up for her in an almost fairy-tale manner – though Tellegen refrains from labelling her experience.

Tellegen has always been at home with the fairy-tale, the surreal; his poems are seldom rooted in the nitty gritty of the here and now, nor do they rely heavily on naturalistic imagery for effect. But the world he depicts, in seemingly simple terms, is very much a modern one, a contingent space of ambivalence and instability.

The two poems are from a long Selected Tellegen, Under a Giant Sky, to be published by Shoestring Press this summer.

* n.b a further poem is featured in the print issue.

Published in The Illuminated Paths, 2019 Number 2 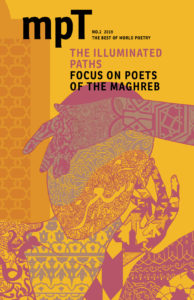