Cyprian (Polish brethren poet from our past)
can I tell you there is a heft to your o!
A whole poem in the exclamation o! Here
a mouth is tunnel for change. The mouth
a vessel, this o! with implicit no and groan,
hummed from the backs of throats, sounding
like rope. The rope which would swing
black men like unlit lanterns in the Southern prison
of night where white men hunted after twilight.
Freedom’s noose bloomed bruised blues
in your, night coming – a black night with a black
face! I too write a letter to America, asking
how the land of the free maybe in vain, asking
definition between lynched and hanged? Asking
o! This poem is also song, and dirge, asking
a repeated chorus o! Humming the gospels
of the South, as Aretha Franklin and Mahalia
Jackson’s throats pelt out soulful melodies,
grievance sore and John Brown’s soul does not go
marching on. It is April and there is still no old
John Brown, no Glory, Glory, Hallelujah. There is no
spring, only cold sleet as I too write a letter to America.
o! Cyprian now men die in chokeholds and fluttering breath
has replaced the fluttering feet of the hanged,
muttering I can’t breathe, breath flailing
like the beheaded chicken flapping into death.
Cyprian, know we held our breath at George’s
trial as four more died between lawyer’s summary
and verdict and know that these too are spectacle,
now the noose is a knee on the back of a throat.

Over the ocean’s undulant plain
A song, like a seagull, I send you, o! John…

Reading Polish poet Cyprian Kamil Norwid’s poem To Citizen John Brown written in November 1858, I am struck by his empathy and compassion for the abolitionist John Brown’s cause balanced with harsh criticism levied against America’s brutal institution of slavery. It was profound reading this elegiac critique against the backdrop of an international community gripped with the dramatic tension of George Floyd’s trial, and still witnessing daily public lynching of Black bodies at the hands of the American police.

I was struck by the small exhalations of breath resonant through- out the poem, in its dramatic exclamations of the vowel o! and its echoes throughout the poem: over | ocean | John | on | for | gone | rope | your | stone | fold | douse | crown | – Here the vowel o! becomes litany and most importantly reverberates in many ways with song. Yet is reminiscence of a tiny gut wrenched sigh – which takes on massive contemporary resonance read against a litany of witnesses in a court of law repeating the circumstances surrounding George Floyd’s
last breath.

This o! bears the qualities of testimony, solace, and healing evocative of negro spirituals, and Mahalia Jackson and Aretha Franklin’s gospels. Each defiant couplet is melody – ageless hymn resilient, yet radical. The o! alongside the quiet power of dashes and eclipses demonstrate the horrors language is too inadequate to capture and I wanted my poetic response to answer the o! this mouth round in protest, this vessel for sound, and this moan from the fragile throat. 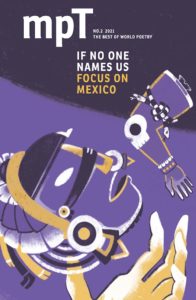