Yasuaki Inoue is a well-known and highly respected haiku poet in Japan, whose work deserves an international audience.

I met Inoue in Kofu, Yamanashi Prefecture, while I was hosted by Professor Michiyo Takano and Yamanashi Prefectural University (YPU). Professor Takano kindly provided a literal translation of a selection of Inoue’s haiku. The literal translations were far shorter than the standard 7-5-7 syllable count, so I took some liberties with my versions. Happily, I was able to discuss what I had added with Inoue via an interpreter (thank you, Andrew Houwen). My Japanese grew during my six weeks in Japan but is still extremely limited. Still, I was lucky enough to attend one of Inoue’s haiku workshops at YPU. I found that people wrote their haiku very quickly indeed – I was considerably slower – we then had to guess who had written which haiku.

Towards the end of my stay in Japan, I had the opportunity to read with Inoue in one of Kofu’s oldest buildings, where he read his haiku in Japanese and I read these English versions. We were accompanied by the famous koto player, Dr Tamaki Ando. Many thanks to Inoue Sensei and to Professor Takano for all of their help. My thanks to Arts Council England’s Artists’ International Development Fund for a grant which enabled me to travel to Japan, where I met so many inspiring people. It’s been a wonderful experience and I’d love to return.

These haiku and other poems written in Japan will be published in a pamphlet, Typhoon Etiquette, by Verve Poetry Press in April 2019.

Visual poetics: 'You Own Your Own Thoughts' and 'Prayer' 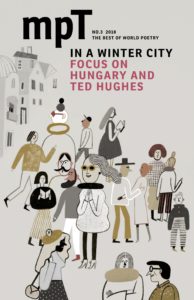