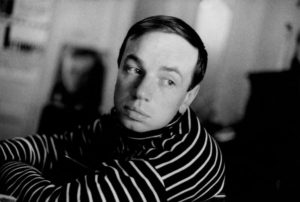 urban existence made larger than lifesize
Valentina Polukhina, the Guardian

Andrei Voznesensky was born in 1933 in Moscow. He found an early artistic passion for painting and architecture, graduating from the Moscow Architectural Institute in 1957 with a degree in engineering before discovering his calling in poetry. While still a teenager he sent drafts of his poems to Boris Pasternak, who wrote back to Voznesensky saying ‘Your entrance into literature was swift and turbulent. I am glad I’ve lived to see it.’ In ‘I am Fourteen’ Voznesensky wrote, ‘From that day on, my life took on a magical meaning and a sense of destiny.’
The editors of Modern Poetry in Translation No.1 write ‘Voznesensky’s poetry is architectonic in its concern for structure,’ and note that the the translations in the issue are ‘difficult’ because ‘his verse is all designed to be read aloud – and ideally by himself’. The poems in this issue contain warmth and humour. ‘Roman Holiday’ opens with the note: ‘In Rome at the New Year it is the custom to throw old things into the street.’

Rome rattles and shakes
like a runaway breakdown truck.
All over Rome and round about
the New Year’s coming in!

Like Mills bombs, bottles
dropped from windowsills,
crash all over the place,
and what price that tough
shoving a bathtub onto a balcony?

Up on the Piazza di Spagna,
spinning like a flying saucer,
a husband is flung from his nuptial bed:
he’s obsolete and all but dead!

Voznesensky’s first book of poems Mozaika (Mosaic) was published in 1959 but the authorities repressed it, and forced the publisher to sack the editor. His collection Antimiry (Anti-worlds) was the basis for a famous production at the Taganka Theatre in 1965.
His fame grew, however, and in a 1980 Paris Review interview Voznesensky was described as ‘Russia’s equivalent of the Beatles’. He commented: ‘It is a Russian tradition to listen to poetry, but before us there had been no big audiences. A poet didn’t sell many copies of a book of poems. If a poet sold a thousand copies, he was very happy. Then we began these readings, and the audiences grew—at first small audiences, and then several hundred people, and then finally as many as 14,000 in a stadium; it was like a sport.’
With fame came notoriety and the attention of the Soviet authorities. In 1962 Krushchev publicly criticized Voznesensky at a Communist Party Reception saying ‘Just look at this new Pasternak! You want to get a (foreign) passport tomorrow? You want it? And then go away, go to the dogs! Go, go there to your masters.’
The editors of Modern Poetry in Translation No.1 write, ‘Advance orders alone for his volume ‘The Triangular Pear‘, reached 100,000 before publication.’ Throughout his career his readings filled stadiums around the world and in 1976, he even had a small planet named after him – 3723 Voznesenskij.