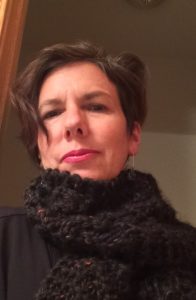 Karen Kovacik has published translations of contemporary Polish poetry in American Poetry Review, Boston Review, Colorado Review, Crazyhorse, Poetry East, West Branch, Mid-American Review, Southern Review, and World Literature Today, and in the anthologies Six Polish Poets, edited by Jacek Dehnel (Arc Publications, 2008). In 2011, she was awarded a fellowship in literary translation from the National Endowment for the Arts, and she’s the translator of Agnieszka Kuciak’s Distant Lands: An Anthology of Poets Who Don’t Exist (White Pine, 2013), and the editor of Scattering the Dark, an anthology of Polish women poets (White Pine, 2016). Also a poet, she’s the author of three collections of poems: Metropolis Burning, Beyond the Velvet Curtain, and Nixon and I (Kent State, 1998). Her work has received many awards, including the Charity Randall Citation from the International Poetry Forum. She was Indiana’s Poet Laureate from 2012-2014.