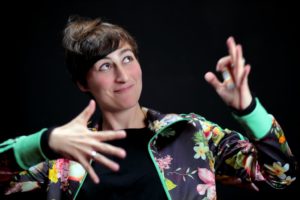 ULRIKE ALMUT SANDIG was born in former East Germany in 1979, and has written four volumes of poetry. She is a notable performer and works with filmmakers, sound artists and musicians. Her CD with poetry band LANDSCHAFT appeared in 2018. Her prizes include the Wilhelm-Lehmann-Prize, the Horst-Bingel-Prize, the Erich Loest Prize and the Roswitha Prize for her novel Monsters like us (2020).