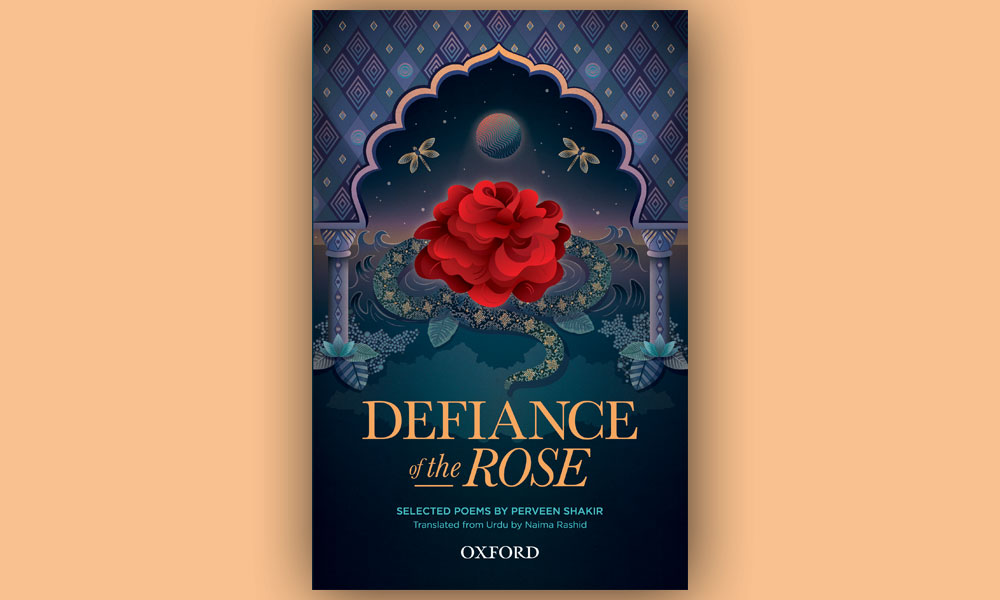 Defiance of the Rose: Selected Poems by Perveen Shakir, translated by Naima Rashid, (Oxford UP, 2019).

This stunning collection of 100 poems by Perveen Shakir is an accessible, beautifully arranged introduction to a highly respected, late 20th-century Pakistani poet. Ranging from wry social commentary to portraits of the natural world to meditations on loneliness, Shakir’s poetry is both reflective and personable, melding together her astute critical observations with pathos and lyricism. Translator Naima Rashid seizes upon this interpersonal engagement and integrates it into her editorial approach. In her prefatory notes, Rashid asks ‘How could a work of translation be positioned as an experiential offering instead of a scholastic one? What if the poems were curated not in any linear dynamic but placed instead like artworks in an exhibition playing off each other a different angles of contact, and building up a story which crystallized slowly, its episodes coming together strand by stand[?]’

Rashid is clear in her purpose of curating this collection for a broad audience rather than restricting it to an academic one. Eschewing certain elements that one might expect in a retrospective collection, such as footnotes, publication history, and an extended biographical note for Shakir herself, the poetry is the primary focus; the reader learns little about Shakir herself outside of her writerly voice. While this is certainly a valid approach, basic information like publication dates and the original collection titles would have provided useful context for readers unfamiliar with Shakir’s oeuvre. The most extensive editorial intervention comes in the inclusion of the Urdu originals after the English translations, both in Nastaaliq script and an English-alphabet transliteration. This is an excellent resource, as it maximizes the accessibility of the collection to speakers and non-speakers, and readers and non-readers of Urdu alike.

Shakir’s poetic voice is marked by vivid, sometimes idiosyncratic imagery that centralizes the figure of a lone female poet against the world. The collection opens with a frisson of foreboding in ‘When the Wolves Come’, wherein the poet anoints her house with rose petals against an incurring threat: ‘These shields of roses— | will they save me | when the wolves come?’ For the poet, a sense of threat is never far from her threshold. The wolves appear again in ‘A Poem Composed Upon the Rubble’, ‘Beyond the Night (For Parveen Qadir Agha)’, and ‘Will’, becoming a motif that embodies myriad dangers to the solitary poet, who resists their onslaught with just her words to protect her. Even the shelter of the house can be an unsettling space; in ‘A Voice from Down Under’, the stillness of domestic serenity is disrupted: ‘deep from within the bowels of the house, | a harrowing voice incessantly howls, | ‘Release me!’ | ‘Release me!’.

Written poetry and spoken words are invoked like protective talismans. But what exactly is the creeping danger that Shakir seeks to hold at bay? The answer seems to lie in the recurring depictions of alienation. ‘Talking to Myself’ describes a mechanism wherein isolation through misunderstood language eventually leads to withdrawal from communication. But when the poet loses control over her self-imposed silence, the fearsome possibility of disintegrating into non-existence looms:

I shudder to think,
as I continue to shrink
deeper and deeper
within myself—
what if I lose the frequency
at which I talk to myself,
and one day, I am left behind,
screaming ‘May Day!’, ‘May Day!’ in the void.

The image of screaming into silence reappears in the poet’s ruminations on memento mori in ‘Westminster Abbey’: ‘Silence is its own language, but | beyond a point, | even silence begins to scream’. This language of silence is fraught with dread; to lose one’s words, whether by isolation or through death, is an acute crisis that must be countered -in Shakir’s case, through poetry.

Shakir describes an especially pernicious form of alienation and silence in the incisive ‘Tomato Ketchup’. Here, the male-dominated literary world is described as a ‘jungle of wolves’, filled with condescension and slander of women poets. This theme arises again in ‘For a Poetess’ (‘A deer and a wolf can never be friends.’) and ‘The Suggestion of a Senior Officer’, where the poet is described as an ‘appendix in the body— | useless, but sometimes, a cause of great pain. | There’s only one solution to the mystery—surgery’. The exhausting loneliness of having to occupy a position of constant vigilance and defence calcifies in ‘Misfit’, which closes with the resigned sigh that ‘Either I am composed of some strange matter, | or this is not my planet’.

These moments of despair are relieved by lighter verses such as the tongue-in-cheek ‘What Will Become of the Flowers?’ and the joyful rush of ‘Who Does Not Long for Travel?’ Shakir’s poetic range is apparent in the short, vivid tableaux of ‘Mischief’, ‘Echo’, and ‘Companion’. The last few poems of the collection take on an especially lyrical tone, with the night becoming a dominant theme in ‘Prayer’, ‘Dream Come True’, and ‘Confusion’. In particular, ‘A New Night’ dazzles with its masterful metaphors: ‘Convinced that my body | was doomed to eclipse, | I had severed all ties with light’.

While Shakir’s themes of isolation and fear can be fraught with conflict, her poems are always luminous, gleaming with earnest reveries and haunting imagery. Pulsing with feeling, yet elegant in their expression, her verses are antidotes to the very alienation that they describe. In translating Shakir’s works, Rashid has done nothing short of a public service; to move through this gallery of contemplations is to experience an invaluable poetic voice.

Sarah-Jean Zubair is a postgraduate student in English literature at University College London. She holds an MA in English and Comparative Literature from Columbia University, New York.