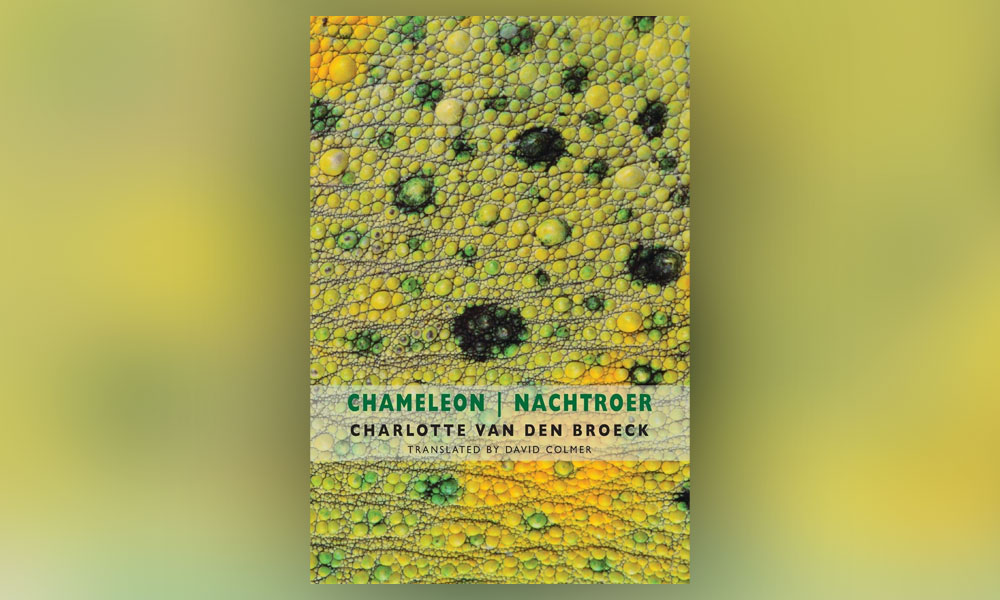 The new Bloodaxe edition of Chameleon /Nachtroer gives you two books in one – Charlotte Van Den Broeck’s first and second collections. Both are mostly written in free verse, with few formal structures. Her sentences have a free-flowing lucidity to them, whilst respecting the line as a poetic unit. I found both collections very enjoyable, mostly because of their imaginative inventiveness. You never know what might pop into her poems next, such as two lovers described as ‘entangled sausages’. This sustained inventiveness held my attention all the way through – I kept wanting more and more goodies!

Van Den Broeck is a whizz at turning abstract thoughts and feelings into images. For example, ‘now the city’s curling up grey and contained in a corner’. And she is excellent at presenting an embodied experience, however abstract the subject matter, such as ‘ someone who wants to be an explorer |knows how to use the skin as a pop-up tent’ or ‘July, pale heat, fingers dripping from my wrists…’ There is an honesty and accuracy in this embodiment, such as when she describes ‘the disappointment between your shoulder blades’.

Although the two collections are similar in style and theme, the second Nachtroer (all-night shop) is the stronger. Here, Van Den Broeck has more control of her material, and the poems feel deeper, more resonant. And there are some longer sequences which work well with her expansive imagination. (In contrast, her lightness of touch in Chameleon can come across as flippant and a bit shallow – the ideas not fully worked through). In the second book, the poet has perfected her fresh metaphors and similes and her effective use of repetition within sentences. This repetition is unforced, and effective at making the reader reconsider the form and meaning of a sentence, as well as adding an enjoyable sense of rhythm. For example: ‘the first fish will crawl out of the water again, I will bear | the light again, warm in the afternoon again | in your peach skin’.  Or: ‘not touching but giving me the possibility | of pushing up against it the boundless possibility | of pushing up against a hand that is not touching |me but giving me the possibility to’. In fact, her use of language often gives the reader pause for thought as to the possible meanings of a seemingly simple sentence, such as the poem ending: ‘I mustn’t have enough.’ Her metaphors achieve that difficult goal of being both surprising and accurate, such as ‘later still in the ice hole of your face | you see a howl behind your eyes’; or ‘because the postcard slides over the view so quickly’.

If I had a criticism of Van Den Broeck it is that her emotional palette is what we already expect from the younger generation of poets: feelings of dislocation, discomfort, disembodiment and problematic identity are apparently as heartfelt in Belgium as in the English-speaking world. It’s relatively easy subject matter to write poems about. This familiarity of tone and emotional state made me question the epithet of originality one reviewer had bestowed on the book.  Having two collections in one volume does show up any narrowness of emotional range.

Likewise, I would have welcomed more variation in form. Van Den Broeck usually uses short, uneven stanzas and free-ranging line length. This is clearly a form she’s comfortable with and it works with her subject matter, but I like to see a poet pushing their technical boundaries a little. After two collections it can leave the poems blending into one another in the reader’s mind. However, these were two hugely enjoyable collections to read. A heartfelt thanks to Bloodaxe and translator David Colmer for introducing us to this accomplished, young voice.

Charlotte Wetton is based in West Yorkshire. Her first pamphlet I Refuse to Turn into a Hat-Stand won the Michael Marks Awards 2017. She has been published in Poetry Wales, Staple, Stand, and won a New Writing North award in 2019. She has performed at Aldeburgh and Ledbury festivals; came second in the StAnza Slam, and has a spoken word album, Body Politic. She is currently studying for an MA in Creative Writing at the University of Manchester and will start a PhD there in September. www.charlottewettonpoetry.wordpress.com