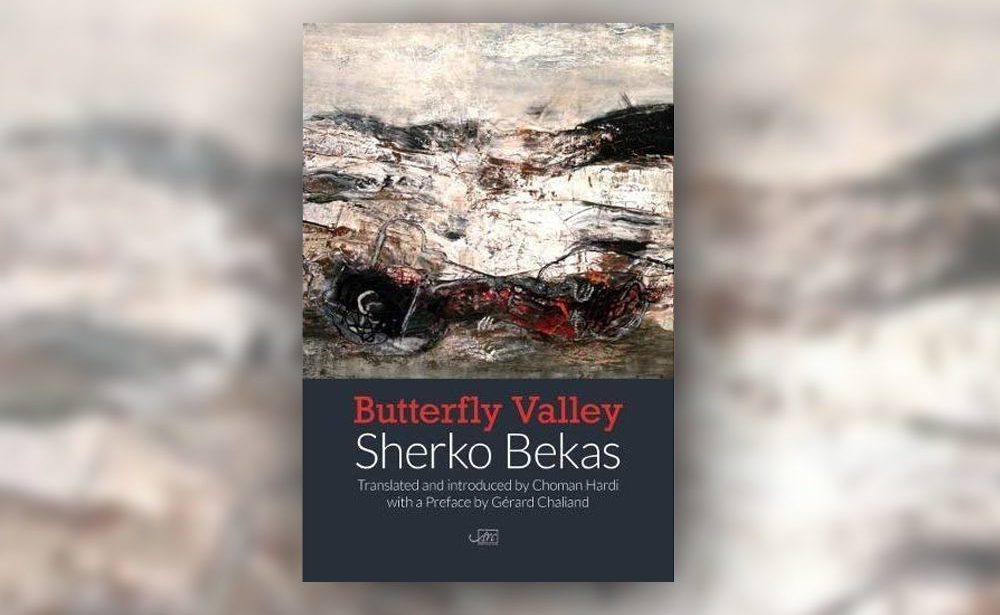 Butterfly Valley is Sherko Bekas’s fifth collection. It is a bilingual, Kurdish-English edition, translated by Choman Hardi. In the introduction, Hardi, who is a fine poet in her own right, describes Bekas as a ‘pioneer in Kurdish poetry’, who ‘established himself as the poet of resistance and became the face of the liberation movement’.

The book-length poem was written in response to the Anfal genocide (February to September 1988) and Saddam Hussein’s gassing of Halabja. During the Anfal attacks, 100,000 Kurds were murdered. The collection was first published in Sweden in 1991, (Derbendî Pepûle, in the original), where Bekas was in exile.

Exile is a major theme in Butterfly Valley, as is the genocide, Kurdish politics, Kurdish poets and the beauty of Kurdistan – specifically its mountains. Bekas uses repetition, a dense layering of tremendous metaphors, and a circling around the issues, as if he cannot settle or come to terms with events. At times, the words run away:

Bekas doesn’t offer a cool look at highly emotive issue. Bekas shows us his, and his people’s, pain:

Drop by drop the rain writes flowers
as tear by tear my eyes compose you.
What streaming year of exile, what generous pain,
which bring to blossom the mountain of my head
He honours the people who were gassed, as he brings ‘exile’s moonlight’:
Don’t bury those white flowers till I come.
Wait! Don’t give them up to the cradle of history.
Let them lie on their backs
on the grass hill,
[…]
Don’t close the sky of their eyes,
don’t cover them with a mountain cloud, till I come

Due to the book’s complexity, especially with a non-Kurdish readership in mind, Hardi only published 70 per cent of the original. This is brave and positive decision. It is a wonderful read but demands stamina. I found the sections where Bekas summons Nali, a famous nineteenth century Kurdish poet, difficult; probably due to my ignorance of Nali’s influence. Hardi’s helpful footnotes will be essential for most readers.

There is so much to admire here, including Bekas’s even-handedness in discussing Kurdish politics, from the woman who had had enough of revolution, ‘What is left for you to come for? The sieve of our bodies?’ to the warring within Kurdistani political movements, ‘the self-destructive flocks of wounds’.

His imagery – and Choman Hardi’s translation – is tremendous. One horse is ‘blue and winged. This blue one was a neighing lake, […]’. On the genocidal attacks: ‘God may be on fire | this smoke may be rising from him!’ And Bekas’s response: ‘Some of my hands were stealing my fingers’ – have you ever read a better way of describing the wringing of hands?

Butterfly Valley is an epic poem, one Bekas had to write:

What else can you do, when your stage is ember
and your audience is rifle?
You had to do this –
to write poetry with the tip of flame
and set fire to your fear and silence.

Katrina Naomi’s most recent collection is The Way the Crocodile Taught Me (Seren, 2016). Typhoon Etiquette, a pamphlet inspired by Japan, is forthcoming with Verve Poetry Press in April 2019. www.katrinanaomi.co.uk