This online workshop focuses on ‘SPACE BOY WEARING SKIRT’ by Lee Jenny, chosen by Writer in Residence, So J. Lee. Beneath you can see the original Korean text, presented along with a ‘literal’ translation, provided by So J. Lee.

You can submit your translation through the form at the bottom of this page. It may help to format your poem in Word (or another text editor) to adjust the shaping of your text, and then copy/paste this into the submissions box. We’ll endeavour to preserve your poem’s shape when we publish it online.

Please send us your translations by 31 August and So J. Lee will pick their favourite submission to feature on the MPT website.

So J Lee’s residency is supported by LTI Korea. Find out more. 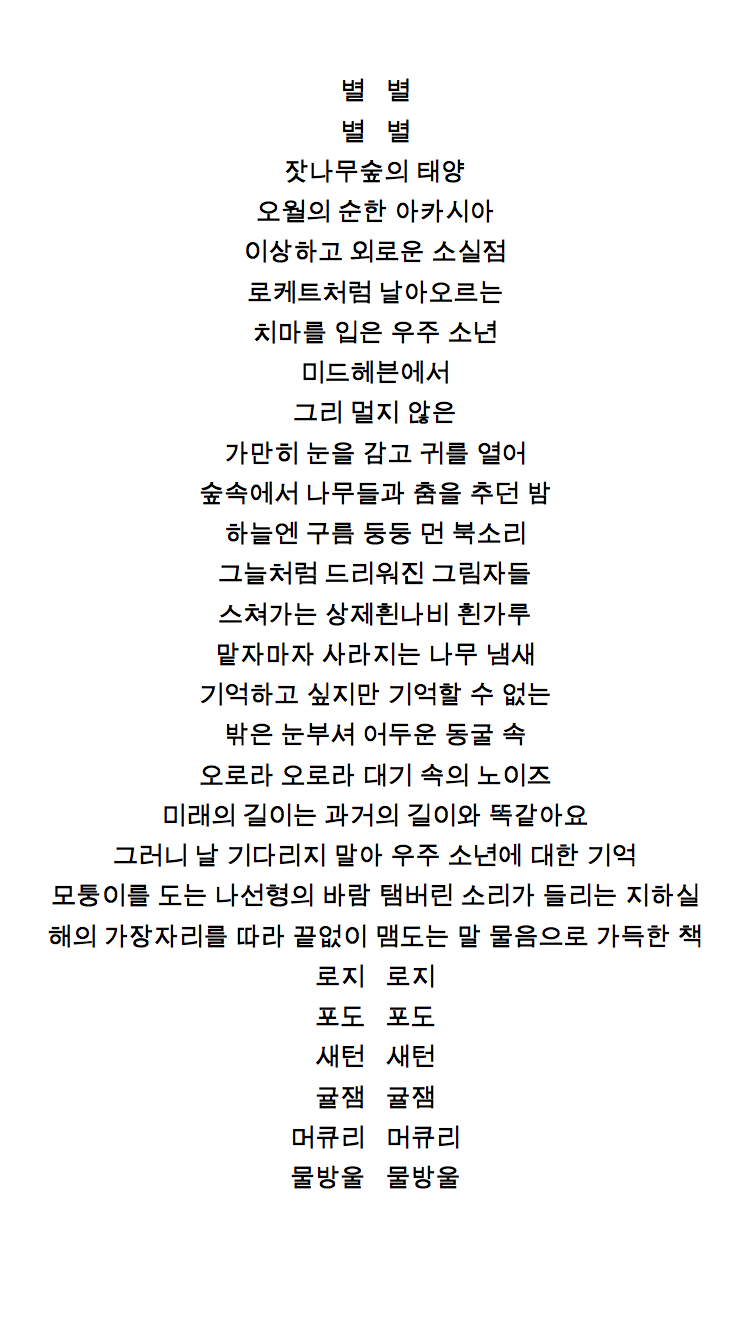 Listen to a reading of this poem by the poet Lee Jenny.

Literal translation by So J. Lee

If this text is not displaying correctly, click here to view a screenshot.

Help on translating this poem

Notes from the poet, Lee Jenny:

This poem draws from my memory of visiting a white pine forest in Toechon-myeon of Gyeong-gi Province.

Though it was mid-day, when I looked up at the sky from the base of these tall trees, the sun was flickering between the branches

and gave a little dark yet cozy feeling that felt surreal, like a sanctuary for my heart.

Afterwards, looking at the photos I took of the sky sunlit between branches and of the white pine trees

I suddenly came to think about a different space than reality.

Just as I felt, without considering the meaning of the poem at all,

just as it was being written, as if to write from dictation,

As I kept writing, the ‘star star’ felt like the antennae of a space boy,

so I thought I’d center-align the poem and write about the space boy.

I wrote the poem on the next page, ‘Earth Girl Wearing a Rain Poncho,’ a year later, thinking it’d be nice for ‘Space Boy’ to have a buddy.

Though I don’t have any special requests for the translators,

in case I can help,

as well as his lonely but calm and dignified attitude.

I wonder if you could make your translation a bit funky

Notes from the translator

Notes from Writer in Residence, So J. Lee:

star   star
star   star
sun over pine forest
mild acacia blooms of may
vanishing point, strange & lonely
and flying off like a rocket—
space boy wearing a skirt
not too far from
midheaven
the night I danced with trees in the woods
my eyes gently closed and my ears unfurled
in the sky clouds buoyed boomed distant drumbeats
shadows________ overhanging like shades_______
mourner’s white butterfly white powder brushing past
tree scent that disappears as soon as it’s smelled
want to remember but can’t remember
outside is blinding bright inside a dark cave
northern lights northern lights atmospheric noise
the length of the future is the same as that of the past
therefore do not wait for me memories regarding space boy
helical wind turning a corner basement echoing with tambourine rustles
words orbiting endlessly along sun’s edge a book brimming with questions
rosy   rosy
grape   grape
saturn   saturn
mandarin jam   mandarin jam
mercury   mercury
water droplet   water droplet